There are many organisations working to preserve the environment. Some protect animals, others plants, others generally fight against the destruction of the environment by economic interests. There are also quite a few associations that fight for the respect of human rights. Some organisations denounce the unjust capitalist economic system, which is freer than the communist one, but not fairer either, and demand a monetary order that does not follow a blind lawfulness to create wealth through poverty and confront the state with hopeless equalisation tasks. Many associations limit their activities to the national framework, while others act globally. The problem with all these initiatives: they each deal with sub-areas, but their causality is inextricably linked to the other areas. If the work of these organisations is to have lasting success, they must at least cooperate with each other.

Equilibrism offers a concept that deals with the most important problem areas across the board and strives for global implementation. These areas can be broadly represented in four cornerstones that are mutually interdependent:

In order to show how these areas are interdependent, it is useful to compare them with the functions of the human body, which is itself a perfect system of integrated systems:

And just as all parts of the body are equally important and not one may grow unchecked at the expense of the others, neither may the economic activity of man take precedence over his other needs, nor may the use of natural resources by a species show constant rates of increase. Everything that is taken from nature must also be returned to it as quickly as possible in order to remain in the cycle.

Equilibrism does not want to tinker with faulty systems, but to completely renew them by returning to the respective basic issues; in this respect it is consistent because it goes to the roots. At the same time, new framework conditions are established. The benchmark is always that they are in harmony with nature.

The “disadvantage” of the equilibrism concept: since each area is already very complex in itself, the overall concept requires a fair amount of receptiveness on the part of those interested. But if we see ourselves empowered and entitled to intervene in nature as “experts” in a special field, with consequences for other fields, then we must also be interested in the consequences. We believe that no alternative is more convincing than one that can be proven by a successful example. That is why our goal is to start concrete projects that can consolidate the basis for a successful dissemination of our concept.

Whether we take the still growing world population, the foreseeable end of fossil energies, the decreasing biodiversity, the destruction of the natural basis of life or the social and economic developments: in no area is it possible to project the current courses of events even to the end of the century just begun without reaching catastrophic dimensions.

Where evolution moved in units of millions of years and – when things were moving fast – millennia, always advancing very carefully, we are stepping on the gas, bringing changes every hour. “Global acceleration crisis” is what the astrophysicist Peter Kafka called this phenomenon: we have no time to check the success, to test the effects of an intervention. All new developments have to be deployed as quickly and globally as possible in order to recoup the investment. If the consequences are too serious, we simply intervene again.

We unhinge the world, although we are not able to keep it in balance then; so it will come crashing down on us and bury us. But since there were many who leveraged at different points, no one will feel responsible, no one will be held accountable – but all will bear the consequences. This is what the alleged homo economicus does with his environment: first he spends a lot of money to destroy it, then he invests vast sums to save it.

Even if, according to equilibrism, man is not necessarily the crown of creation, his current role in the continuation of life on this earth is as decisive as the work of a restorer for a damaged work of art. If he uses the right materials and understands his work as a service to the original, it will be saved. If, on the other hand, he thinks he has to implement better ideas than the author of the work with means he has developed himself, the existing remnant will still be destroyed.

The work of evolution was and is very good! We want to direct our actions towards interfering as little as possible with its work. Within the leisurely progression of evolution, there is still enough room for man to act for real “progress”, in which there is still room for the existing. 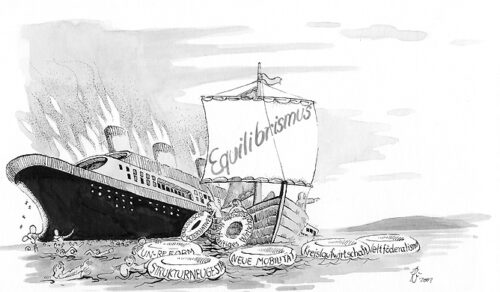